In the mid-1990s, during sometimes contentious Little Compton public meetings about the activities of local land conservation organizations, the drafting of the town’s Comprehensive Plan, and various other issues involving the town’s natural resources, one long-time resident would sometimes offer an anecdote about the source of the town’s groundwater. Her father, she would declare, had always said that the town had ample groundwater. The evidence, he had recounted, was the blue dye that appeared in the town’s wells from a known source originating in the White Mountains. Our water, that is, flowed here underground from New Hampshire, in copious quantities.

This comment, which I heard on more than one occasion, was something of a show-stopper–and not necessarily because it sounded preposterous. In fact, no-one could really offer reliable documented data to refute this reassuring morsel of Little Compton folklore. There was a general understanding of the town’s underlying “fractured bedrock” geology, but there existed little solid information about the quantity and quality of water actually available to sustain the lives of the people living in town and the other resources that comprise the organic environment.  In fact, all of us who live in Little Compton (and who have lived here throughout the centuries) take the availability of ample, clean water as a matter of faith. Individual property owners dig or drill a hole in the ground and pump out the necessary life-providing fluid nature provides.

For years, the town’s Comprehensive Plan has included the following priority action item: “Conduct a Town-wide hydrologic study to
provide a quantitative assessment of groundwater resources.” Only recently, though, has a town board pursued this goal in a serious, sustained way. The Conservation Commission, a five-member appointed volunteer board with a modest budget appropriation ($6,000 for the current fiscal year), three years ago initiated an economical, elegantly designed study to sample wells on private property throughout Little Compton. At the April 21 meeting of the Town Council, Commission Chair Don McNaughton presented a clear, detailed description of the study’s results after three years of sampling and provided some sobering observations about possible future consequences suggested by the study’s findings. (A copy of the study is available here.)

Here is a passage from the presentation that concisely explains the study’s methodology and scope:

In collaboration with URI researchers, Dr. Thomas Boving and Jeeban Panthi, the Conservation Commission launched a multi-year research project in 2019 to better understand our freshwater resources. Little Compton sits almost entirely atop fractured bedrock, a geological condition that complicates efforts to predict the quantity of water available to our residents and farms. However, changes in water quality can serve as an indication of whether we have enough water for current use and future needs.

In our fractured bedrock setting, we do not have a water-laden aquifer from which to pull, nor is there water coming from “elsewhere” to feed our wells. Instead, whatever water we have available to us comes from precipitation (rain and snow) that has worked its way down into the cracks and fissures of our bedrock, eventually seeping into our wells. When the amount of precipitation changes, the amount of freshwater available to us changes in relatively short order.

We measured the well water samples for their electrical conductivity, a simple and inexpensive way to estimate the amount of dissolved solids in the water. High levels of Total Dissolved Solids (TDS) in drinking water could indicate the presence of salt water, septic system residue, or run-off from fertilizers. By monitoring changes in TDS results over a period of years, we will better understand the relationship between precipitation and groundwater quality, and be able to track any evidence of water quality degradation, which could signal water quantity concerns.

As it happened, the variable precipitation over the three years of the study to date provided an ideal opportunity to measure whether differing levels of precipitation resulted in differing levels of Total Dissolved Solids (TDS), such as salt, fertilizer, and septic system residue. As illustrated in the chart below, 2019 was a year of above-average precipitation (61.6 inches), 2020 below average (40.5 in.), and 2021 almost exactly average [as measured over a 30-year span] (49.4 in.). The chart below indicates the results: 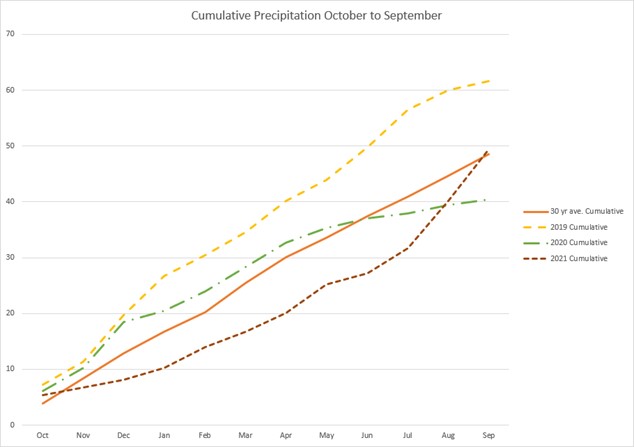 Here’s how the report explains the rapid and detectable relationship between precipitation and TDS levels:

This happens for two major reasons.  First, the same fissures and cracks in our bedrock that feed freshwater to our wells sometime also connect to the salt water in the ocean and bay that surround Little Compton.  When precipitation has been plentiful, there is sufficient freshwater in the cracks and fissures to hold back the saltwater from reaching our wells.  However, during periods of low precipitation, when there is less freshwater, the saltwater is able to advance further into the fissures and cracks, and reach wells in close proximity to the coast.  This is known as “salt water intrusion”.  Unfortunately, freshwater demand also rises in periods of drought, as homes and farms use more water for irrigation (lawns and crops) and recreation (pools), thus increasing the chance of salt water intrusion.

Second, during periods of low precipitation, there is less freshwater to dilute the impact of our septic system leach fields, and of home and farm fertilizer use.  Thus, as precipitation ebbs, the main drivers of Dissolved Solids increase:  sea salt, septic residue and fertilizer.

Finally, the Conservation Commission depicts some of the study’s results graphically for the three years of the study. TDS levels are mapped from lowest in parts-per-million (dark green) to highest (dark red). The maps are arranged chronologically, from left to right: 2019, 2020, and 2021:

The report highlights the prospects for saltwater intrusion into wells, especially in the southwest corner of town near and surrounding Sakonnet Point, in drier years:

A few things to note in these maps. First, we clearly see lower levels of Total Dissolved Solids across town in both 2019 and 2021, the two wetter years of the three. Second, we see in each of the maps small areas of very high TDS readings. These elevated measurements are usually signs of individual wells adversely affected by a highly local source of TDS or contaminates. Third, and finally, we note that the low-lying area of Sakonnet Point shows higher TDS levels than other areas in town. This, we surmise, is due to saltwater reaching wells near the coast. In particular, the driest year, 2020, resulted in the highest TDS levels around the harbor at Sakonnet Point, supporting our hypothesis that there was less freshwater available to hold back seawater from infiltrating wells.

The members of the Conservation Commission, through their diligent and smartly conceived efforts, have at last begun to provide some concrete and useful data by which to measure and monitor the quantity and quality of groundwater available to sustain the town’s residents and environment. The information they have gleaned to date suggests that Little Compton may not face an immediate groundwater emergency or crisis. On the other hand, they have been able to document how the groundwater supply and its quality may be vulnerable to rapid change and depletion, depending upon levels of precipitation, periods of drought, sea level rise, and increased consumption.

The Conservation Commission’s members, McNaughton noted at the April 21 meeting, plan to continue and expand their study, depending on the resources and funds available. Their efforts deserve the community’s support. One way to help is to complete a survey at their website: https://littlecomptonwaterstudy.com

Solutions and approaches to the challenges they are identifying will have to be addressed here, in the peninsular terrain that constitutes Little Compton. There is no subterranean stream of water flowing from New Hampshire to provide for us or our successors on this landscape.♦