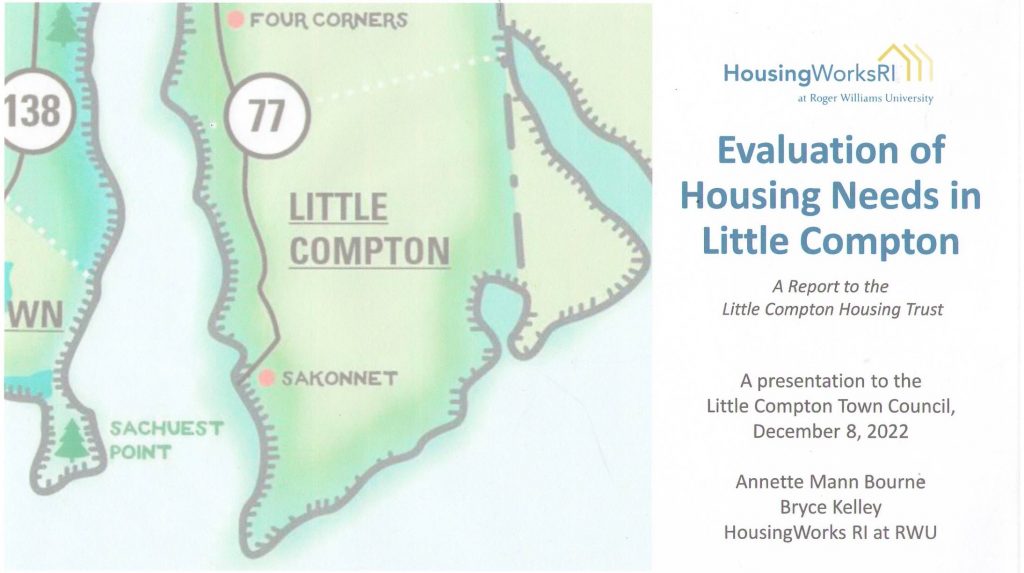 At the December 8, 2022 meeting of the Little Compton Town Council, Annette Mann Bourne and Bryce Kelley from HousingWorks RI, a non-profit organization affiliated with Roger Williams University, presented results of the town-wide survey of housing needs they had developed and conducted on behalf of the Little Compton Housing Trust (LCHT).

The Housing Trust is a volunteer board, appointed by the Town Council, which was established by a 2005 town ordinance (Section 2-9.1):

to serve as an advocacy group for any person or group desiring to address the problem of housing affordability or housing for the elderly, those with special needs and families of low and moderate income. The Housing Trust shall generally oversee the implementation of the Affordable Housing Plan of the community, shall monitor long term housing affordability for the community, and advise the Town of Little Compton in its efforts and support the Town’s goal of diversifying the housing stock. The Housing Trust shall also advise the Town in its amendment of the Affordable Housing Plan.

The Housing Trust’s current members include Patrick Bowen (President), Andrew Iriarte-Moore (Treasurer and Liaison of the Town Council), Isabel Mattia (Secretary), Robert R. Rottman, Susan Bodington, Claudia McNeil, and Amanda Nickerson Toste. The Housing Trust has struggled during its 17-year existence to get its footing in addressing a complicated and substantial challenge. In my opinion, there is some legal ambiguity and confusion about the Trust’s authority as provided by town ordinance and in Section 710 of the Home Rule Charter, which was recently amended by voters. (In a previous post, I have discussed some of LCHT’s history, as well as the scope of its legal and political authority.)

Nonetheless, the new report, as summarized in the presentation to the Town Council, “Evaluation of Housing Needs in Little Compton,” represents an important achievement by the Housing Trust. As documented in the presentation, such a survey is specifically identified as an “Action” item for which the Trust is assigned responsibility in the town’s 2018 Comprehensive Plan:

Action H1.a. Conduct a survey in order to evaluate demand for senior housing and affordable housing.

At the Town Council meeting, Ms. Bourne and Mr. Kelley offered an informative, even-handed commentary to accompany a 24-slide PowerPoint preservation. They noted that their findings were based on a significant public response–382 people in all–to a questionnaire, as well as interviews with town officials and other “stakeholders.”

It won’t surprise current Little Compton residents or property owners, or anyone hoping to live or own property in Little Compton, that the town’s already steep housing costs have risen sharply in recent years. The $797,000 median price of a single-family home price in Little Compton as of 2021 represents a 48 percent increase since 2016, ranking the town in the top third of increases among Rhode Island’s 39 municipalities over that five-year span. The $797,000 figure represents the third-highest median single family home price among the state’s cities and towns.

Other survey findings provide additional data and context about the cost, affordability, quantity, and variety of the town’s housing stock. For example:

Interested residents and readers should consult the presentation for some of the survey’s other statistical and factual findings. According to Ms. Bourne, the full report on which the presentation is based, as well as other supporting materials, will soon be available to the public as well. HouseWorks RI’s 2020 Housing Fact Book also provides comprehensive data about all the state’s cities and towns.

I include below: 1) the report’s compilation of “themes” identified during the stakeholder interview, and 2) recommendations for next steps offered by HousingWorks RI to meet the housing needs of the town’s current and future residents.

• Expense: Little Compton has become one of the most expensive places in Rhode Island to purchase a home, with many residents there due to familial ties that go back many years. The combination of expense and history has contributed to a lack of overall diversity and may give rise to an impression of an air of exclusion.
• Growing Concern: Widespread agreement on the extent of the [housing affordability] problem.
• Examples of community care: from organizations that help seniors age in place, by doing grocery shopping or providing rides to doctor’s appointments, as well as solving community needs through local philanthropic support.
• Agricultural Identity: While agricultural identity figured largely for all those interviewed and was generally acknowledged as a source of pride and history, the barriers it represents in creating more housing that is affordable to a wider variety of residents was clear to all. The Little Compton Agricultural Trust (LCAT) is strongly supported, and it was invoked several times as a possible resource or model for how to achieve more housing.
• Agile/Aggressive Development Strategies: Housing Trust needs to be able to act immediately when those rare opportunities arise that would produce the kind of housing that is needed and also in keeping with the town’s geography and identity.
• Unique Needs of Rural Communities: General agreement that the state’s laws and both state and federal sources of funding do not work for rural places.
• Public Participation: Suggestions for public meetings, a housing forum, and more education generally, including a manual that would help to establish a “common baseline” from which to work.
• Next Steps: Further work could also include research of the tax assessment list, municipal ordinances, and the structure of the Housing Trust.

1. Devise appropriate density incentives for property owners and developers in designated areas for the creation of homes affordable to low and moderate income.
2. Consider additional sources of revenue for the work of the LCHT so it may more readily secure properties when they become available, including a municipal bond.
3. Consider mutual purchases of properties between the LCAT [Little Compton Agricultural Conservancy Trust] and LCHT where the latter can retain any buildings for housing.
4. Reach out to other similar Rhode Island municipalities, like New Shoreham, Barrington, and Charlestown, to learn of their approaches.
5. Hold townwide discussions regarding various approaches and what residents will approve. 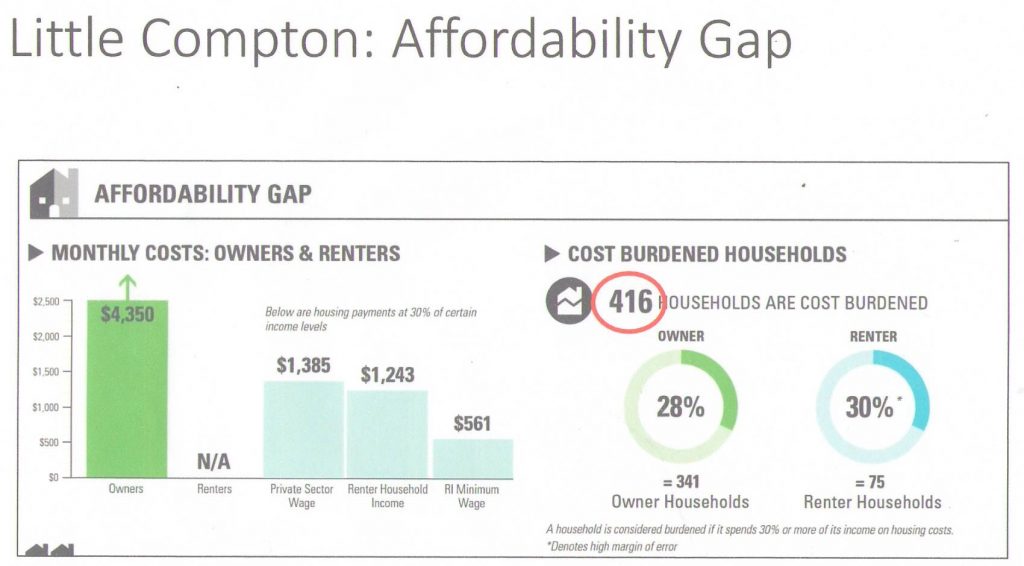 I believe the fifth and final HousingWorksRI recommendation is and will remain the most important need identified in the survey: “Hold townwide discussions regarding various approaches and what residents will approve.”

No housing policy will succeed without a broad base of public support from Little Compton’s residents and property owners. Such support can’t be achieved without the recommended “townwide discussions regarding various approaches and what residents will approve.” And such discussions, in my opinion, should occur frequently, in open forums conducted in good faith. The Housing Trust’s useful townwide survey represents a good “common baseline” for community consensus-building as Little Compton addresses the formidable challenge of creating more–and more affordable–housing opportunities. ♦